Learn what the Appalachian Storage and Trading Hub could mean for West Virginia.  It’s anticipated this project could bring up to 6,000 construction jobs and tens of thousands of permanent, high-paying, skilled jobs with it.  Potentially located in the West Virginia, Ohio and Pennsylvania tri-state area, this could provide the raw materials for manufacturing activities for anything based on petrochemicals (pretty much everything you own).  This session will help you understand the possibilities available to your association, your property and West Virginia. 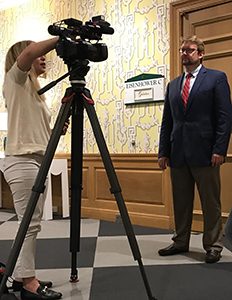 Dr. Brian J. Anderson is the GE Plastics Materials Engineering Professor in chemical engineering at West Virginia University and Director of the WVU Energy Institute. His research interests include molecular, reservoir, and multi-scale modeling applied to energy and biomedical systems. A native of Ripley, West Virginia, Dr. Anderson is widely regarded as among the top energy research professionals in the country. He is frequently lauded for his focus on and contributions to richer and cleaner sources of energy, energy security, scientific leadership and research excellence. In 2012, he received the Presidential Early Career Award for Scientists and Engineers, the highest honor bestowed by the US Government on emerging scientists and engineers. He was also recently featured on the “Inspiring West Virginians” radio series by West Virginia Public Broadcasting. Dr. Anderson’s distinguished career has also included numerous other awards, recognitions and prominent service positions.

Thanks to our meeting sponsor:

Reservations are due by Friday, September 7, 2018, and can be made by using the form below.