Join us June 11 at the Marriott Town Center Hotel, when Justice Tim Armstead discusses where the Court is now and what the justices have done to restore the peoples’ confidence in the West Virginia Supreme Court of Appeals.

The  former Speaker of the WV House of Delegates, Armstead was appointed along with former Congressman Evan Jenkins to the WV Supreme Court on Aug. 25, 2018, in the wake of the controversy surrounding improper use of state assets by members of the Supreme Court. The end result at the time was two Justices stepping aside allowing Gov. Justice the respective appointments.

Speaking of the appointments, Gov. Justice said, “Both of these appointees are true conservatives, and both have the honor and integrity we need to restore trust to our highest court. These men have dedicated their lives to serving the people of West Virginia,” Both men filed to run for the unexpired terms of those seats and were officially elected on November 6.

Justice Armstead served as a member of the WV House of Delegates representing Kanawha County’s 40th district from September 1998 until his appointment to the Court.  On January 14, 2015 he became Speaker of the House after Republicans swept into power after 82 years of Democratic Party rule of the chamber.

Armstead sees his major accomplishments in his public career as improving the business climate and economy in West Virginia; judicial/legal reform; and tax reform by reducing or eliminating onerous taxes on West Virginians.

It has been well over a decade since a Justice of the Supreme Court of Appeals met with us, so take advantage of this opportunity!  Reservations are due by Friday, June 7, and can be made by clicking here.  The board of directors will meet at 11:00 a.m. 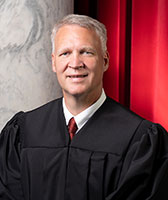 Justice Tim Armstead was appointed to the Supreme Court of Appeals of West Virginia by Governor Jim Justice to fill the seat vacated by the retirement of Justice Menis Ketchum. He took office September 25, 2018, and was elected November 6, 2018, to retain the seat until the end of the term on December 31, 2020.

Justice Armstead began his public service career as a press intern for Governor Arch Moore. He later worked as Executive Assistant to the Chief of Staff of Governor Cecil Underwood. He served as a law clerk for U.S. District Judge David A. Faber.

Justice Armstead is a graduate of the University of Charleston and West Virginia University College of Law. He lives in Elkview with his wife, Anna. They have one daughter and a grandson.

Thanks to Our Sponsor

Use the form below to register by Friday, June 7.