The Foundation of Liberty

“[The denial of trial by jury] led first to the colonization of this country, later to the war that won its independence, and finally, to the Bill of Rights.”
—  Justice Hugo Black

Beth White, CAE, APR, shared some of the history none of us ever learned during her October presentation on “The Foundation of Liberty: Trial by Jury.”  She said, when asked, most people

identify the Boston Tea Party as the nexus for liberty in this country.  In fact, she says it’s the Zenger trial of 1735 that established truth as a defense to libel charges that was the germ of liberty.

The Magna Carta, signed by King John I in 1215, was the “great charter” that protected the civil liberties of English subjects and guaranteed the two great pillars of democratic society—representative government and trial by jury.  When that document expired in approximately 1500, “The Star Chamber” became the political weapon to bring actions against those who challenged the crown and involved secret court sessions with no indictments, no appeal, no juries and no witnesses.  “The Star Chamber has, for centuries, symbolized disregard of basic individual rights.” (U. S. Supreme Court – Faretta v. California, 422 U. S. 806 – 1975)

The 1689 Bill of Rights in England reaffirmed the rights guaranteed in the Magna Carta—including trial by jury.  William and Mary were required to sign it before taking the British throne.

In America, colonists reasserted the right to trial by jury and it was guaranteed in the First Charter of Virginia (1606) and in all subsequent colonial charters.  In 1751, the South Carolina General Assembly declared that “any person who shall endeavor to deprive us of so glorious a privilege of trial by jury” was an enemy to the people of the colony.

“All of the 13 newly formed States restored the institution of civil jury trial to its prior prominence . . . Indeed the right to trial by jury was probably the only one universally secured by the first American state constitutions.”  —  Justice William Rehnquist in the Parklane Hosiery Dissent

Perhaps, had we had Beth as a history professor, we would have learned something and stayed awake!

Also, by having our lunch and meeting on the porch at The Retreat, Pat McDonald created the new title of “screen wrangler” in the windy conditions. 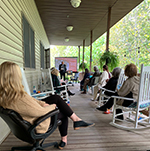